We are very honored to have Chewy & Vinegar Hill Films tell our story. Hopefully SNAP Cats will inspire more people to help rescue and save special needs animals. Click on the image above to check out this video. You can read the Blog below.

At animal shelters and rescues across the world, cats with special needs face an uncertain future: a lower likelihood of adoption, and higher rates of euthanasia. But Darryl Roberts, founder and director of SNAP Cats, is on a lifelong mission to save as many special needs cats as he can.

“Some people might say, ‘What’s wrong with that cat?’” Roberts says. “And I would say, ‘There’s nothing wrong with these cats. They’re loving and they sit in your lap and they do everything a non-special-needs cat does. They just happen to be blind or deaf.’”

Plus, they’re just as deserving of love, he adds.

That’s why Roberts founded the SNAP Cats rescue and sanctuary—to give special-needs cats the love and care they deserve until they find the perfect forever family. The Sonoma County, California, nonprofit organization houses just 50 or fewer cats at a time, with conditions ranging from blindness and deafness to paralyzed, incontinent and “wobbly cats,” who have a neurological disorder called cerebellar hypoplasia that causes jerky movements. But though SNAP’s size is small, they’ve made a big impact, finding homes for over 500 cats and taking in cats from as far away as Egypt and Syria. SNAP is committed to providing everything a cat needs—things like high-quality food, medical treatment and daily snuggles—to ensure each kitty gets to live their best life.

“These are perfectly great cats,” Roberts says. “If you keep them happy and healthy, and you get them regular vet checkups, they can live long, happy lives.”

Roberts wasn’t always an advocate for special needs cats. He first fell in love with a pair of 10-week-old kittens named DJ and Blanche, whom he adopted from a friend whose cat had just had a litter. Neither cat had special needs, he says, but the experience of cat parenthood was life changing.

“To have animals that are dependent on you gives you a whole new perspective on what life’s really about,” he says. “It’s hard to describe. It’s like explaining rain to somebody that doesn’t know what water is. These cats look at you and you know that they need you, but they give you so much in return. All of a sudden it hits you in the face and you go, ‘Wow, I never knew an animal could care so much for a person.’”

When DJ once went missing, Roberts looked for him at a county shelter and was struck by the sight of sad-looking cats in cages. After DJ was found about a week later, Roberts began volunteering for a local cat organization. Inspired by his care and concern for the animals there, he left his careers in film production and publishing to become a vet tech.

Through working at the shelter, he saw firsthand that cats considered to be the least “adoptable”—like those with medical issues—were the first to be euthanized to make room for incoming animals.

A pivotal moment came when Roberts was asked to euthanize the overcrowded shelter’s four special-needs cats: one who was blind, one who was deaf, a wobbly cat, and a cat with a missing limb. He refused to carry out the order, and was asked to leave. 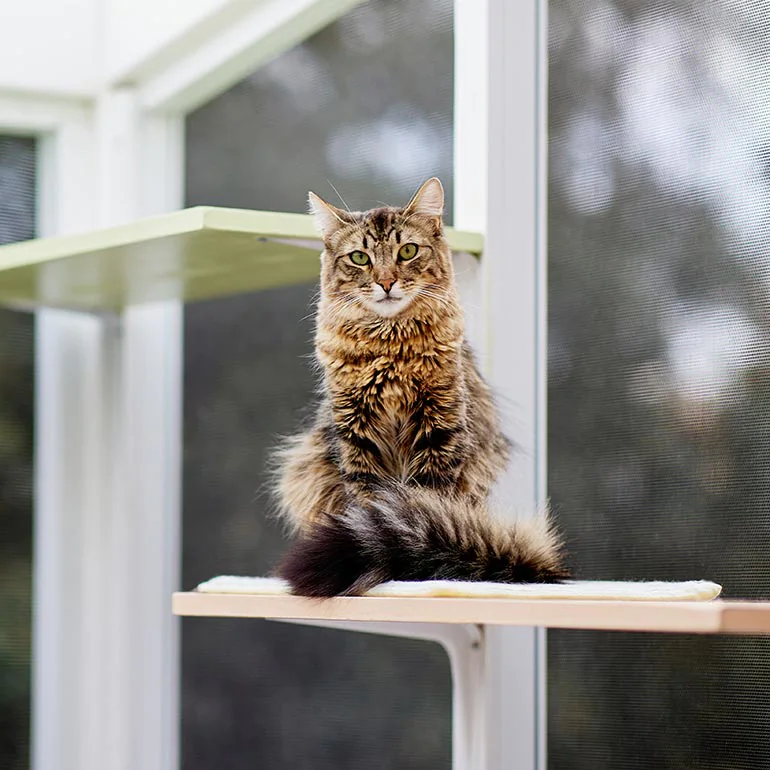 Today, SNAP Cats operates two campuses in Santa Rosa and Sebastopol, taking in cats with a wide range of conditions.

“We have wobbly kitties. We have tripods [three-legged cats]. We have sight-impaired cats. We have incontinent cats. We have paralyzed-in-the-rear-end cats. So we have pretty much all of what you would normally consider special needs,” Roberts says.

SNAP Cats is a rarity among West Coast rescues in that it cares for cats with compromised immune systems, such as those with feline leukemia virus (FeLV). Cats living with FeLV must be kept in an isolated room to prevent transmission to other shelter animals.

“Rescuing leukemia kittens is a big part of what we do because not many other places do it,” Roberts says, “and we want to try to save as many as we can.”

Watching the animals grow tumors, develop lymphoma or other complications isn’t easy, Roberts says: “We know that they’re only going to be here a couple years at most, and it’s really hard.”

But SNAP is committed to giving all cats the best life possible, no matter their illness. Plus, if FeLV-positive cats survive to 1 year old, they have a much higher chance of shedding the virus, Roberts says. To provide more sick animals the opportunity to live full lives, SNAP Cats is fundraising to build a separate facility entirely dedicated to leukemia cats and kittens called Lukie House. Roberts hopes the facility, which will house 20 to 25 cats, will open sometime next year. 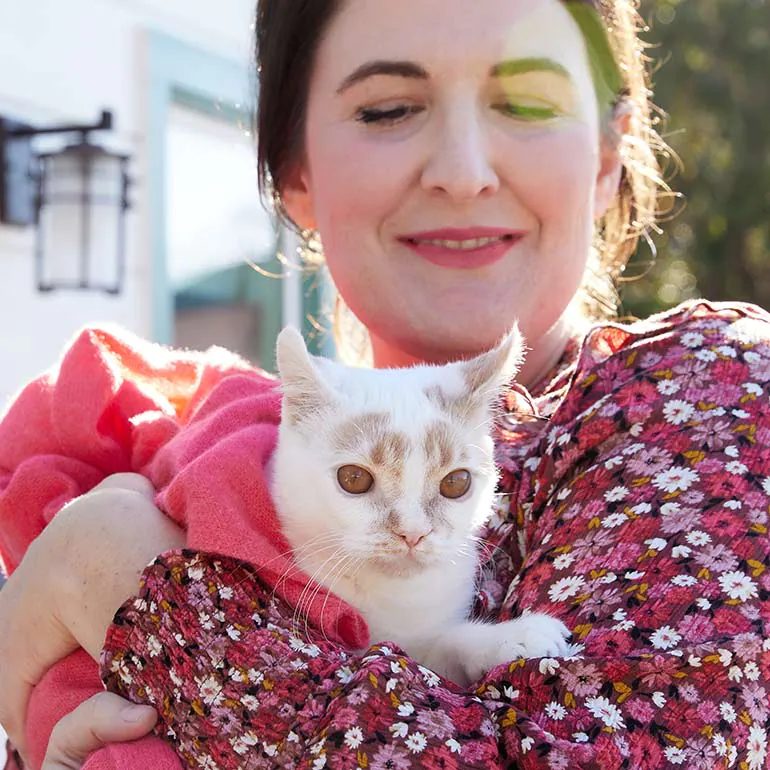 Anna, a black cat with hazel eyes and a splash of white across her chest, is a SNAP rescue from Kuwait. She’s paralyzed in her back legs after suffering abuse in her home country. But in many ways, Roberts says, she’s a typical cat: curious and personable, with a quirky streak that shows when she begs for attention then unexpectedly darts away. Since arriving at SNAP, she has come out of her shell and let her personality shine, Roberts says. After about a year of recovery, she was finally considered ready for adoption (and she’s still waiting for a forever family today).

“I look at SNAP as a prepping ground,” Roberts says. “We give them the training to help them come out and display their personality for us to get to know them, what they want, what they need and then find the perfect home for them.”

Adoption is the ultimate goal for all the cats at SNAP, Roberts says. But once a cat is in his care, they’ll have a home no matter what happens. The sanctuary is a place where the animals can be themselves during the time they have — a place where each cat’s dignity is important. If the cats never get adopted, that’s OK, Roberts says: “They have a place to live for the rest of their lives.”

Here, the staff and volunteers are their families, each committed to Roberts’ mission to give each animal the best life possible. Tawny Brunetta has volunteered at SNAP Cats every Saturday for about five years. She’s a “cat cuddler” who sits with the cats and pets them, in addition to keeping their living space clean. Being around the cats helps “get them acclimated to human attention and human touch and human love, so when they do get adopted, they’re comfortable with humans—they’re ready to go,” she says.

Special-needs cats change adopters’ lives for the better too, Roberts says. “They’re connecting with cats they probably normally wouldn’t connect to,” he explains. “It’s changed their outlook to viewing them not as special-needs anymore.”

Yes, many of these cats will need care that’s a little different—and potential adopters need to be aware of the unique commitment that comes with each cat—but where it counts, they’re still a typical cat who deserves the love, care and stability a family can provide.

While they’re at SNAP, Roberts is their family. “Every adoption, for me, is very emotional. These are like my kids, you know? Once they’re adopted, it’s really hard to let them go.”

But each adoption also gives Roberts the chance to provide a brighter future for another cat—and that’s the ultimate goal.

“We’re trying to rescue as many special needs cats as we can,” Roberts says. “I just feel this calling to give them a great life until it’s their time. I can’t save every special-needs cat, but we can sure try.”

How You Can Help

Inspired to make a difference for special needs cats? Here’s how you can join SNAP Cats’ mission:

Adopt: Most of the cats at SNAP are adopted by California locals, but the organization has found homes for cats all across the country, and even internationally. You can see cats available for adoption and fill out an online application at Cats for Adoption.

Shop Their Wish List: It takes a lot of gear to support 50 cats! Check out the products on the rescue’s Wish List, then add a few to your cart and check out to have them sent right to SNAP Cats’ doorstep.

Sponsor a Cat: SNAP Cats offers an opportunity to Sponsor a Cat or contribute cash toward basic necessities, medical care and more.