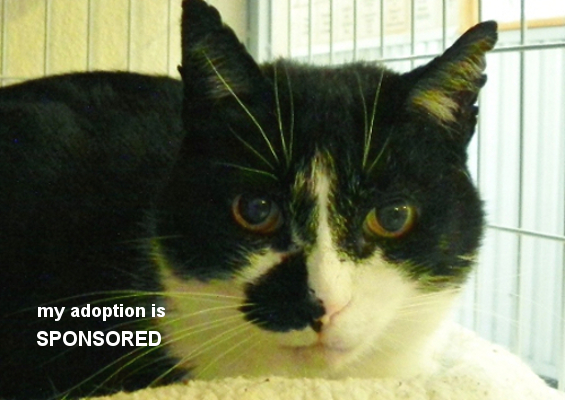 Baker is very handsome in his black and white tuxedo! This senior is suprt friendly, too, and very social. Baker's a special needs kitty because he has FIV, Feline Immunodeficiency Virus. He's not sick, but does have a compromised immune system. This means Baker should be indoors to keep him safe from infections, feed him a good diet, and see your vet regularly. Just like any cat! FIV is not contagious to people or dogs, and only to other cats through bite wounds. Baker loves attention, on his own terms. He loves to be near you, and he likes to sit in laps. Baker doesn't like to be fussed over! He doesn't care for other cats, so is looking for an indoor home where he'll be the only kitty. Baker loves to talk! His adoption fee is sponsored, so he's no charge to an approved adopter! How cool is that!

Update: Baker was recently returned after being adopted for one year. His owner worked long hours. We think Baker needs more attention. This home seemed like it would be fine for Baker, and his adopter gave him a lot of time to settle into a routine, but we totally understand his coming back. In the fairness of disclosure, Baker started clawing at his carpet, damaging it. Since it was a rental, his owner had no choice but to bring him back. So, for his next home, we'll be looking for a home where his people are around much more to keep Baker from becoming bored. He's worth it! Petaluma Animal Services