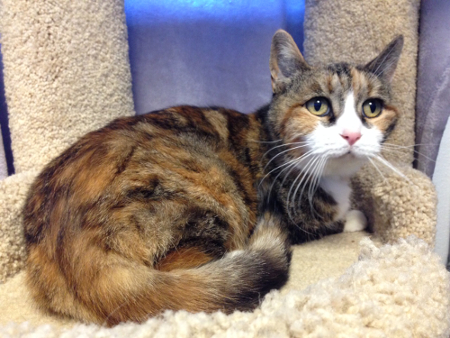 SNAP Cats rescued October from the Rohnert Park Animal Shelter, were she was deemed unadoptable because of her age and health condition. October was surrendered by her owners who were moving out of state. They had her since she was a kitten. October's owners said that she had been urinating outside the litter box and drinking more water than usual during the past six months, and she drinks a lot of water here at the shelter, too. Due to her age, history and thin body condition we ran a blood and urine panel which were normal except for a high white blood cell count. Based on these results, we started antibiotics and anti-parasite treatment and October gained over a pound!

October lived with a dog in her previous home and was described as: calm, friendly, purrs readily, lap cat. She is a very sweet, senior girl who needs her own home ASAP. So we're looking for either an adopter or fospice care home for October.