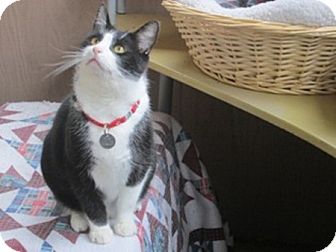 Paddy is healthy except for being FIV+. Apparently, he began hanging out at a woman's semi-rural home in Sonoma. She says it took a month of feeding to gain his trust, but now he's really sweet. Paddy's still somewhat shy but now wants a home of his own. He is up to date on all his shots. (His name is Paddy because the woman who brought him in is named Pat.)