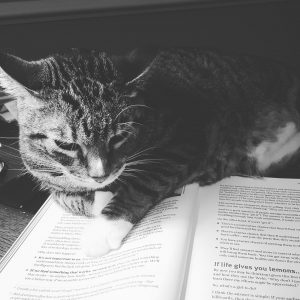 Feline lower urinary tract disease (FLUTD) describes a collection of conditions that can affect the bladder and urethra of cats. This syndrome can have many possible causes, but cats generally exhibit similar, recognizable signs. Cats with FLUTD usually show signs of difficulty and pain when urinating, increased frequency of urination, and blood in the urine. Affected cats tend to lick their genital area excessively, and sometimes they will urinate outside the litter box, often preferring cool, smooth surfaces like a tile floor or a bathtub.

While the condition can be seen in cats of any age, it is most frequently seen in middle-aged, over-weight cats that get little exercise, use an indoor litter box, have restricted access outside, and eat a dry diet. Environmental factors, such as interactions with owners, multi-cat households, and changes in routine may also increase the risk that a cat will develop FLUTD.

How is FLUTD diagnosed?

Although cats with lower urinary tract disease behave in similar ways, the potential causes are multiple. Urinary tract infections, urinary stones, urethral plugs, cancer, and other disorders can affect the lower urinary tract of the cat. Because FLUTD can have many causes, it can be difficult to diagnose. Based on your cat’s signs, your veterinarian will likely perform an initial physical examination and run a urinalysis. If the cause of the cat’s signs has not been identified with a urinalysis, other testing may be recommended, including bloodwork, x-rays, and urine culture.

What are the most common causes of FLUTD?

Feline idiopathic cystitis (FIC) – also called interstitial cystitis – is the most common diagnosis in cats with lower urinary tract signs. FIC is a diagnosis of exclusion, meaning that the term FIC is used if all diagnostics fail to confirm the presence of another disease such as urinary stones. Cats suffering from FIC make frequent attempts to urinate, probably as a result of bladder discomfort, and often are found to have blood in their urine. Signs of lower urinary tract disease in cats with non-obstructive FIC often resolve spontaneously within a couple of weeks regardless of treatment. So most treatments attempt to prevent subsequent recurrence of signs.

Veterinarians have noted many similarities between FIC and a bladder disorder affecting humans called interstitial cystitis. Studies are ongoing to determine whether the human and the feline disorder are truly the same, and whether therapies helpful for humans will be of benefit to cats as well. In humans, a psychologically stressful event often precedes the onset of lower urinary tract discomfort due to interstitial cystitis, and stress also seems to be an important factor in the development of FIC in cats. Possible sources of stress in a cat’s life may include environmental changes, changes in food schedule, and changes in the number of animals in the household. Environmental enrichment and modification can reduce stress and decrease the severity and frequency of FIC episodes. To reduce environmental stress, cats should be provided a safe, clean area in which to urinate, as well as opportunities to express natural predatory behavior. These opportunities may include climbing posts and toys that can be chased and caught.

Because changes in food can also result in recurrence of FIC in some cats, the cat’s diet should remain consistent in both content and schedule. Many pet food manufacturers market diets formulated for “urinary health.” While these “special diets” may reduce the likelihood that cats with FIC will develop a urethral obstruction, there is no evidence that they have reduced the incidence of idiopathic feline lower urinary tract disease itself.

Another possible cause of FLUTD is urinary stones-or uroliths-which are rock-hard collections of minerals that form in the urinary tract of cats. Cats with urinary stones will exhibit many of the common signs of FLUTD. X-rays or ultrasound are usually needed to make a diagnosis of urinary stones. The treatment of a cat with urinary stones depends on the mineral composition of the stones; however, surgical removal of stones is often required. The two most common stone types in cats are struvite and calcium oxalate.

For cats with struvite stones, a special stone-dissolving diet may be prescribed to eliminate the stones. If the diet fails to dissolve the stone, then surgical removal may be necessary. Struvite stones are becoming less common in cats, as most commercial feline diets are now formulated to reduce the likelihood of struvite formation by limiting the amount of dietary magnesium and by promoting the production of urine that is more acidic. Unfortunately, the percentage of stones composed of calcium oxalate has increased. The role-if any-that diet plays in the formation of calcium oxalate stones is actively being studied.

Unlike struvite stones, calcium oxalate stones cannot be dissolved with special diets, and more aggressive treatment is needed. Your veterinarian may be able to induce the stones to pass by flushing the bladder with sterile fluids. If they fail to pass, or if they recur, then surgery may be needed. Called a cystotomy, the surgery to remove bladder stones involves making an incision through the belly. The bladder is lifted into view, opened, and stones are removed.

Cats that have formed a stone are at increased risk for recurrence, and your veterinarian may recommend medication or dietary changes to help prevent recurrence.

Male and neutered male cats are at greater risk for obstruction than females, because their urethra is longer and narrower. Urethral obstruction is a true medical emergency, and any cat suspected of suffering from this condition must receive immediate veterinary attention. When the urethra is completely blocked, the kidneys are no longer able to remove toxins from the blood and maintain a proper balance of fluids and electrolytes in the body. If the obstruction is not relieved, the cat will eventually lose consciousness and die. Death most frequently occurs as a result of electrolyte imbalances, which ultimately cause heart failure. The time from complete obstruction until death may be less than twenty-four to forty-eight hours, so immediate treatment is essential.

A cat experiencing a urethral obstruction behaves similarly to any other cat with FLUTD: straining to urinate, frequently attempting to urinate, and producing little, if any, urine. However, as time passes, an obstructed cat typically becomes much more distressed-often crying out in pain.

Treatment of urethral obstruction usually involves catheterization, which is the passage of a narrow tube up the urethra, but other procedures are sometimes necessary. Unless the cat is comatose, catheterization usually requires sedation or anesthesia. After the obstruction has been relieved, treatment varies depending upon the condition of the cat. Dehydration and electrolyte imbalance are treated with intravenous fluid therapy. Antibiotics may be given to combat bacteria, and drugs that help restore bladder function are sometimes required. Hospitalization may range from a few days to several weeks, depending on the severity and duration of the obstruction.

For cats who continue to experience urethral obstruction despite proper medical management, a surgical procedure called a perineal urethrostomy may be suggested. The surgery involves removing much of the penis and the narrow portion of the urethra, leaving a wider opening for the remaining portion. Side effects of surgery can include bleeding for up to ten days after surgery, narrowing at the surgical site, urinary incontinence, and a greater incidence of other kinds of bladder diseases. For these reasons, perineal urethrostomy is usually considered to be a last resort.

What can I do at home to prevent future occurrences?