DJ on the roof – SNAP Cats
Skip to content

Okay. The roof story. D.J.’s always been an indoor/outdoor kitty. I’ve always lived on a lot of acreage and wanted my kitties to have the best of both worlds. When we moved here two years ago I, of course, made D.J. stay inside for three months before he was allowed outside. About two weeks after we settled in, there was a rattling noise outside my bedroom window (I’m a very light sleeper). My bedroom’s on the second floor, and there’s a roof outside the window that wraps around the rest of the building. So this rattling had to stop. I removed the screen, opened the window and climbed out to see what the problem was… never thinking D.J. would follow me, which, of course, he did. He hates being trapped inside and in the past has broken through a window screen to get outside. So now D.J.’s on the roof and I panic because he’s scooting along the edge looking like he wants to jump off to get “free.” Long story short, I finally get him (after 30 mins of chasing him around the roof). From that point on, D.J. has sat on that bedroom windowsill peering out and scratching at the window to get out. Even after he was allowed to go outside on his own, he still wanted to go out that window. So, now he got his wish. 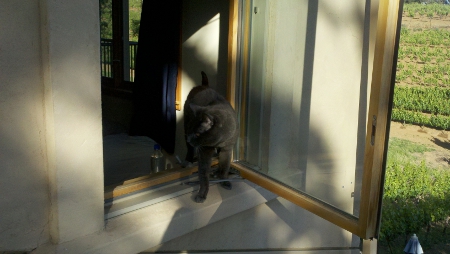 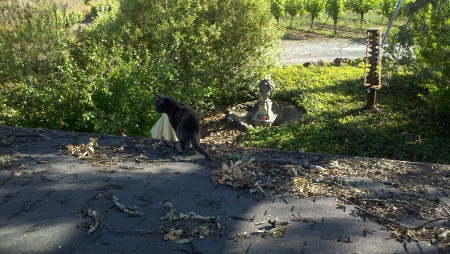 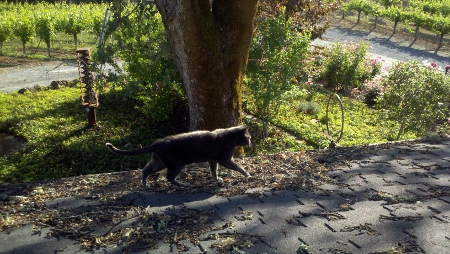 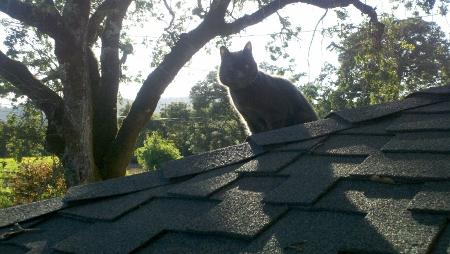