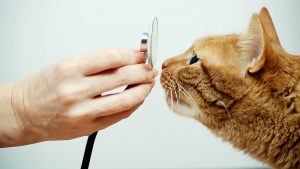 Entropion in cats is a condition which causes the eyelids to turn inward, rather than lying flush and round with the eyeball. Although the condition is not common for cats, it does tend to have a higher rate of occurrence in purebred cats. Both the Burmese and the Persian are two particular purebreds that are known to be afflicted by entropion more commonly than any other cat breed. Entropion is not a life-threatening condition, but it can cause moderate amounts of irritation and can affect the ability of a cat to see normally.

Detecting Entropion
Entropion can occur in both the upper and lower eyelids in cats. However, it seems to occur most commonly in the lower eyelids. Entropion can be seen throughout any stage of a cat’s life. If a cat is born with entropion as a congenital defect, it will soon become recognizable in the months following birth. Because entropion is not always genetic, it can develop later in life at the onset of changes within the eye, which is actually more common than cases of genetic entropion. The following signs can all be indicative of entropion in a cat:

Underlying Causes
Because entropion can occur on two different levels, either at birth or later in life, the causes associated are very different. When entropion develops later in life, it usually signifies a change in the condition of the eye or an underlying health condition. Naturally, entropion alone leaves the eye susceptible to irritation and infection, so identifying the underlying cause is very important in determining a treatment regimen.

Corneal ulcers appear to be the main cause of developing entropion in cats. Because there is a great deal of pain associated with these types of ulcers, the eyelid can sometimes spasm in response, leaving it turned inward. In addition, other infectious diseases or trauma to the eye can also cause the onset of entropion.

Regardless of the cause, it needs to be identified. The condition of entropion alone is not life-threatening, but the inward turn of the eyelid can lead to significant rubbing of the cornea, eventually causing infection, as well as a decrease or complete loss of sight.

Treatment
The most common procedure for resolve of entropion is surgery. During surgery, the eyelid is actually rolled outwards and returned to its normal position. Although, surgery may not always be indicative depending on what caused the entropion to occur. If a secondary infection is present, antibiotic medications may clear up the infection, and the condition of the eyelids may return to normal. The only downfall to surgical entropion correction is that spasms of the eyelid can still occur, regardless of whether or not the underlying condition is treated.